Another major corporate move is poised to bring thousands of new jobs to West Plano.

Boston-based Liberty Mutual Insurance is in talks with developers and the city about constructing a huge service center in Legacy business park, real estate brokers say.

Like the new State Farm Insurance campus in Richardson, the Liberty Mutual project would consolidate operations from multiple locations.

The development – planned on the west side of the Dallas North Tollway at Headquarters Drive – would include two high-rise buildings that could accommodate more than 4,000 workers.

That’s about the same number of employees as will be in Toyota Motor Co.’s new North American headquarters, which is being built nearby.

Dallas-based developer KDC is doing both the Liberty Mutual complex and the Toyota facility, as well as a new office campus for FedEx Office.

All of the new corporate centers are in the $2 billion Legacy West development, which is located at the southwest corner of the tollway and State Highway 121.

Liberty Mutual representatives in the company’s headquarters had no immediate comment about the proposed Plano facility.

And officials with KDC declined to discuss the project. 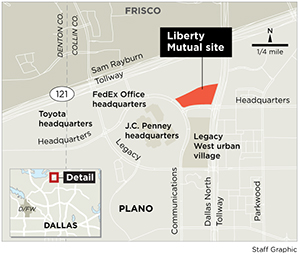 "I do not want to comment on any specific company but as a result of the many attributes, Plano continues to attract significant consideration from companies looking for a great community for their employees and their family,” he said.

Liberty Mutual is a more than century old insurance company with more than 50,000 employees across the U.S. It’s the third largest property and casualty insurer in the country. In 2013, it had more than $38 billion in revenues and $121 billion is assets.

The company operates customer service, claims and processing facilities in several locations across the nation.

Plans for the Legacy office center in Plano call for more than 900,000 square feet of office space. The buildings are being designed by Dallas architect Omniplan.

They would be constructed just north of the $300 million Legacy West urban village, which will include hundreds of new apartments, shopping, restaurants, office space and a luxury hotel.

Word of the big development adds to the buzz about the real estate market in West Plano and Frisco.

“It is unbelievable what has happened in that area over the last five years,” said Greg Biggs, managing director with commercial property firm JLL. “The amount of interest we continue to see is incredible – it’s white hot up there.”

“More than anything, what it is also doing is its garnering more interest nationally for us,” Biggs said. “If there was every a doubt a doubt about Dallas-Fort Worth, it has erased it.

“Numerous companies are saying, ‘What is going on? Why are people making these moves to Dallas?’”

Developers are also hoping that both the Toyota Motor project – with about 3,700 jobs – and Liberty Mutual’s planned campus will bring additional business to the area to support the two firms.

“We will all benefit from having them there,” said Greg Fuller, COO with Granite Properties, which is building the Granite Park office center just across the tollway from where Liberty Mutual is looking. “We love having them across the tollway because other companies that do business with them will need to be housed in the area.”

Building for the future

The planned concentration of new shops and apartments was a draw for the companies, said Jeff Ellerman, vice chairman with CBRE Group.

“In the past, a lot of these campuses were self contained and the company wanted to have everybody in a self enclosed facility,” Ellerman said. “Now it’s the complete opposite.

“All these companies are forward thinking and looking at what the millennial wants -- that is the workforce of the future,” he said. “The recruiting and retention of these workers means you locate in a facility with lots of amenities.”

“State Farm did it in Richardson,” he said. “Toyota put its stake in Legacy.